Q. Dear Donna: I am an elementary school teacher who was in your workshop last week in Cincinnati. Is anyone teaching your work to school children. I am interested in doing this, but if the formula already exits I do not want to "reinvent the wheel."


A. This is wonderful work to take to the schools. The Educational Kinesiology Foundation (www.braingym.org) has been a pioneer in bringing Energy Medicine into schools. They have also sponsored or supported an impressive series of research studies to back claims that energy methods can help children with learning disabilities, enhance academic performance, address the causes of some behavioral problems such as hyperactivity, and increase self-esteem. Our own non-profit Energy Medicine Institute has been conducting a very small program with the St. Louis public school system and you can find updates about it at www.energymed.org. I think that energy methods should be in the tool kit of every public school teacher.

How to pick yourself up at your droopy time of day.
Take a break from your activity and do an energy exercise that activates your respiratory system. Try this quick and simple exercise called, Connecting Heaven and Earth. It helps rejuvenate by pulling in extra oxygen, releasing carbon dioxide, stretching the body so energy can more readily flow through it, and opens the joints, releasing trapped energy. 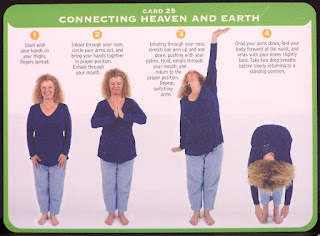 Step 1. Rub your hands together and shake them off.
Step 2. Place your hands on the front of your thighs with your fingers spread
Step 3. With a deep inhalation, circle your arms out to your side
Step 4. On the exhalation, bring your hands together in front of your chest in a prayer position.
Step 5. Again with a deep inhalation, separate your arms from each other, stretching one high above your head and flattening your hands back, as if pushing something above you. Stretch the other arm down, again flattening your hand as if pushing something toward the Earth. Look up to the heavens. Stay in this position for as long as is comfortable.
Step 6. Release your breath through your mouth, returning your hands to the prayer position in front of your heart.
Step 7. Repeat, switching the arm that rises and the arm that lowers. After this first set, do two more sets.
Step 8. Coming out of this pose the final time, drop your arms and allow your body to fold over at the waist. Hang there with your knees slightly bent as you take two deep breaths. Slowly return to a standing position with backward roll of the shoulders.
(This exercise copied from pg 266 of the Energy Medicine Book).
I personally find this exercise to be useful during the holidays when there seems to be so much to do and not enough me to get it all done!
For more information about Energy Medicine go to http://www.innersource.net/
on 12/30/2008 3 comments: 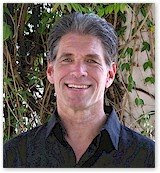